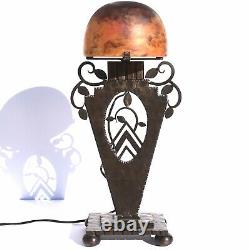 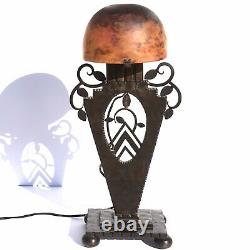 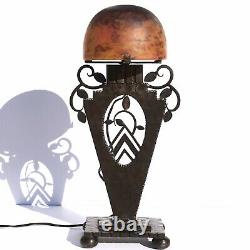 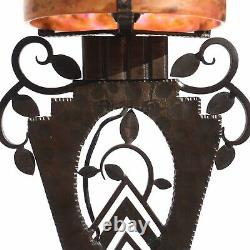 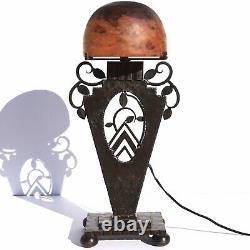 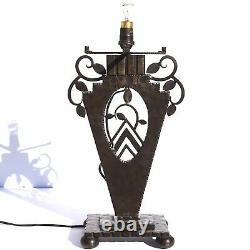 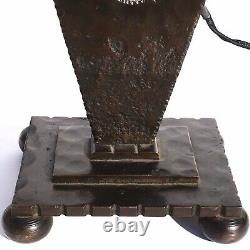 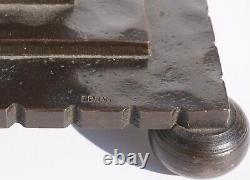 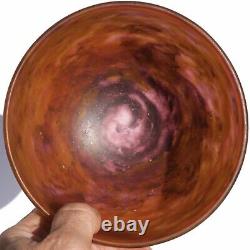 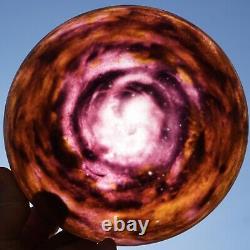 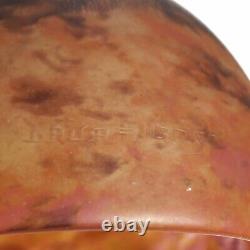 Daum Freres Nancy; Edgar Brandt, Table light, c. Daum Nancy shade is variegated and mottled art glass with powder fusions of, white, orange, red and violet. Wrought, forged iron patinated base has Art Deco decorations of leaves and geometric angles on a rectangular base with 4 circular feet. The lamp has a BauHaus, Modern design that looks like a person with a hat. A truly amazing lamp that may be a one of a kind and definitely museum worthy in excellent condition.

Condition: Excellent with no damage or repairs. Daum Nancy: Daum is a crystal studio based in Nancy, France, founded in 1878 by Jean Daum (18251885). His sons, Auguste Daum (18531909) and Antonin Daum (18641931), oversaw its growth during the burgeoning Art Nouveau period. The Daum family worked at the beginning of the Art Nouveau era and created one of France's most prominent glassworks. Established at the end of the 19th century, Daums renown was originally linked to the École de Nancy and the art of pâte-de-cristal, a major contributing factor in terms of its worldwide reputation. During the Universal Exhibition of 1900 Daum was awarded a Grand Prix medal. Daum glass became more elaborate. Acid etching (by Jacques Grüber) was often combined with carving, enamelling, and engraving on a single piece of glass to produce creative glass masterpieces.

[citation needed] The most complicated creations also featured applied glass elements, such as handles and ornamental motifs in naturalistic forms. The Daum brothers soon became a major force in the Art Nouveau movement, seriously rivalling Gallé, so much so that when Émile Gallé died in 1904 they became the leaders in the field of decorative glass. In 1906 Daum revived pâte de verre (glass paste), an ancient Egyptian method of glass casting, developing the method so that by the 1930s Daum's window panels used pâte de verre for richness instead of leaded or painted glass.

Today Daum still uses this method to produce their pieces. More than 600 glasswork items are in the Daum Collection at the Museum of Fine Arts of Nancy (Nancy Musée des Beaux-Arts), which documents the history of glass manufacturing Alone with Emile Galle, Decorchemont, Argy Rousseau and Amalric Walter from the 1880s through the 1990s. While aligning art with industrial methods, Brandt produced objects dart and embellished buildings and monuments in the Art Deco. Building on the pioneering work of the artist-blacksmith Emile Robert, Brandt became a leading force during a period of great achievement in French decorative arts. He created an entirely new aesthetic for wrought smithing and left behind an impressive number of art historical works. Brandt was born in Paris in 1880 and educated at the Ecole Professionel de Vierzon. At 18 he graduated the Brevet Technicien Superieur and served two years in the 153rd infantry in Nancy. During his military time, he observed that the French infantry had no light versatile long target-range weapons. His subsequent design, and those for 81mm, and 120mm mortars were widely copied throughout WWI and WWII.

In 1902 he opened his business etablissements Brandt to produce ironwork and light armaments. In 1908 Brandt was awarded a Salon prize. After the WWI, he created the Tomb of the Unknown Soldier under the Paris Arc de Triomphe.

Brandt began producing wrought-iron pieces ranging from gateways, grills, radiator covers, and elevator doors to lamp bases, consoles, screens, and chairs. All were done in the popular Art Nouveau style of the day. His wrought-iron was completed with a bronze finish and often incorporated architectural elements with floral motifs. At 29 Brandt was hailed as the rising star of metalwork design by the influential Art et Decoration. In 1919, after inheriting a machine shop from his father, Brandt opened a studio with the help of thirty metalworkers and designers, and the architect Henri Favier. He participated in the famous Exposition Internationale des Arts Decoratifs de 1925 in Paris. Brandt was a major focal point, exhibiting, among other things, several monumental grills commissioned for the entrance hall of the Salon d'Ambassade Francais. He was also responsible for the installation of the Pavillion d'un Collectionneur by Emile-Jacques Ruhlmann, the famous furniture designer. Brandts style began to shift and reflect the geometric forms and the stylized aesthetic of Art Deco. As Brandts popularity grew he accepted more commissions to produce custom work for private houses and apartments. These singular pieces were often collaborations with the leading cabinet makers and designers of the period. Edgar Brandt opened a gallery in New York and another one at the Boulevard Malesherbes in Paris.

He created for embassies, hotels and liners. All the rich and famous wanted and paid for his works. He was awarded the title of Knight of the Legion of Honor, and received the Medal of Honor for Applied Art by the Societe des Artistes Francais In 1939, he moved to Switzerland and died in Geneva in 1960. Brandt is considered the greatest exponent of Art Deco metal work. The item "Daum Nancy And Edgar Brandt Art Deco Table Lamp" is in sale since Monday, December 16, 2019.

This item is in the category "Pottery & Glass\Glass\Art Glass\French\Daum". The seller is "avantiques" and is located in Dallas, Texas. This item can be shipped worldwide.