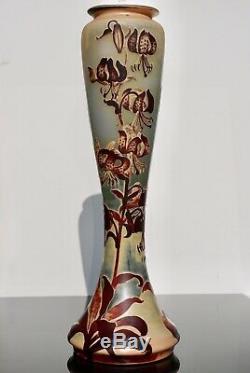 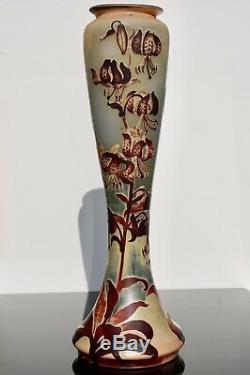 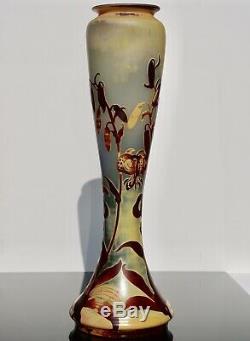 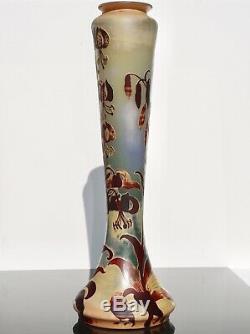 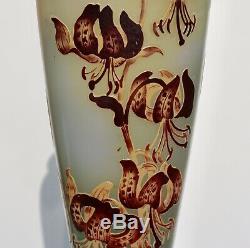 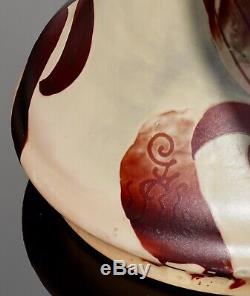 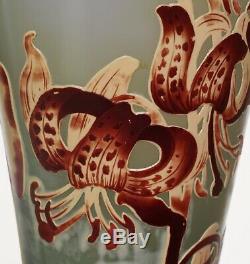 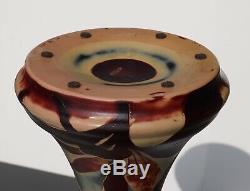 A rare and wonderful Art Nouveau Emile Galle tall 23.3 Inch three-color acid etched floor vase. I have seen this form before but never this size and never with these stunning Tiger Lilys in these contrasting colors.

A rare and beautiful addition to serious collections. Measures: Height 23.3 inches. He later learned glassmaking at Meisenthal and came to work at his father's factory in Nancy following the Franco-Prussian War. His early work was executed using clear glass decorated with enamel, but he soon turned to an original style featuring heavy, opaque glass carved or etched with plant motifs, often in two or more colours as cameo glass. His friend and patron Robert de Montesquiou sent him to Bayreuth with a recommendation to Cosima Wagner, which led to a great enthusiasm for Parsifal.

In 1877, he then assumed his fathers role as director of the Maison Gallé-Reinemer. In that same year, he was elected Secretary-General for the Société centrale dhorticulture de Nancy. His career took off after his work received praise at the Paris Exhibition of 1878. Within a decade of another successful showing at the Paris Exhibition of 1889, Gallé had reached international fame and his style, with its emphasis on naturalism and floral motifs, was at the forefront of the emerging Art Nouveau movement. He continued to incorporate experimental techniques into his work, such as metallic foils and air bubbles, and also revitalized the glass industry by establishing a workshop to mass-produce his, and other artists', designs.

The factory would employ 300 workers and artisans at its height, including the notable glassmaker Eugène Rosseau, and remained in operation until 1936. Gallé wrote a book on art entitled Écrits pour l'art 1884-89 ("Writings on Art 1884-89"), which was published posthumously in 1908. What is less well-known is Gallé's social engagement. He was a convinced humanist, and was involved in organizing evening schools for the working class (lUniversité populaire de Nancy). He was treasurer of the Nancy branch of the Human Rights League of France and in 1898, at great risk for his business, one of the first to become actively involved in the defence of Alfred Dreyfus.

He also publicly defended the Romanian Jews and spoke up in defence of the Irish Catholics against Britain, supporting William OBrien, one of the leaders of the Irish revolt. In 1901, together with Victor Prouvé, Louis Majorelle, Antonin Daum and Eugène Vallin, he founded an Art Nouveau movement known as École de Nancy (The Nancy School). Many of Gallé works are kept at the Musée de l'École de Nancy.

The item "Monumental Art Nouveau Emile Galle Tiger Lily Cameo Vase 24" is in sale since Friday, February 8, 2019. This item is in the category "Pottery & Glass\Glass\Art Glass\French\Emile Galle". The seller is "avantiques" and is located in Dallas, Texas. This item can be shipped worldwide.